Rappy and His Favorite Things (I Can Read Level 2) (Hardcover) 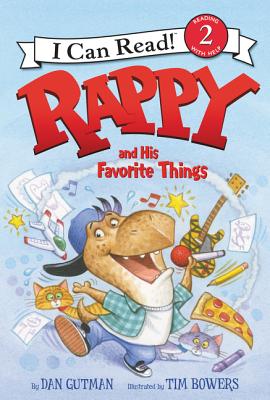 Rappy the Raptor’s class has to write poems about their favorite things for Poetry Week, and the best poet will win a cupcake! Will Rappy discover he’s a poet and he didn’t even know it?

Beginning readers will love rapping along to this Level Two I Can Read tale as Rappy, his classmates, and even their teacher, Mrs. H, rap about everything from flying kites and pillow fights to snow days and mayonnaise!

Rappy and His Favorite Things is a Level Two I Can Read book, geared for kids who read on their own but still need a little help.

Tim Bowers has illustrated over thirty children’s books, including the New York Times bestsellers Dream Big, Little Pig! by Kristi Yamaguchi and Dinosaur Pet by Neil and Marc Sedaka. His artwork has received much recognition, including the Children’s Choice Award and Junior Library Guild selections. Tim lives with his wife in Granville, Ohio. You can visit him online at www.timbowers.com.